The minke whale is the smallest rorqual whale and, as such, was the last to be targeted by whalers. Until the turn of the century, the minke was treated as one species but it is now widely accepted that there are two species: a common minke and an Antarctic minke whale. The latter overlaps in its distributional range with a small form of the common minke, sometimes called the dwarf minke whale.

The Antarctic minke whale is among the smallest of the baleen whales, with only the common minke and the pygmy right whale being smaller. Males can reach a length of 35 ft and females approximately 32 ft in length, and adult minke whales can weight up to 15 tonnes. 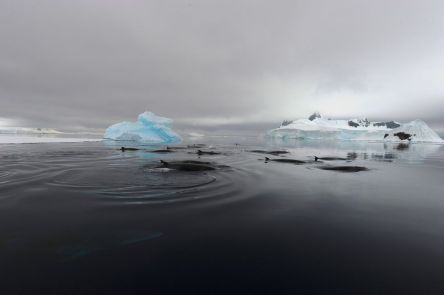 The body colour is usually black or dark brown with streaks of paler colour on their lateral sides, and a distinctly paler belly. It has a notably pointed rostrum and a single ridge on its head. This species often has a yellow wash to its baleen as a result of diatom growth. Most importantly, the Antarctic minke lacks the distinctive white flipper mark that is found in the common minke whale.

Antarctic minke whales are known from around 7º S to the ice edge (and into the ice fields) during the austral summer (November through March). There they feed mainly on krill and, in turn, are important prey items for the orca that also live in these waters. They will occasionally approach smaller boats when feeding. The Antarctic minke whale is usually found alone or in pairs, although aggregations of hundreds of whales can gather in feeding grounds.

The antarctic minke whale reaches sexual maturity at 7 to 8 years old and has a lifespan of approximately 50 ears. The species mates over the winter and the female undergoes a 10 month gestation period, usually giving birth to a single calf, although twins and triplets may sometimes occur. The calf typically suckles for 5 months before being weaned, and will remain with the female for up to 2 years. 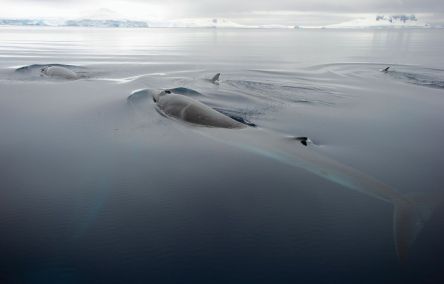 Distribution Map: Minke whales are the only baleen whale species which is still most common in Antarctic waters and the most ice adapted of the Antarctic baleen whales. They have been seen hundreds of kilometers into heavy pack ice in the middle of winter and some of them obviously spend winter there. In summer, their favourite habitat seems to be open pack ice, that is, pack ice where there is quite a lot of open water among ice floes.

Minke whales (both Antarctic and common) continue to be hunted in large numbers by the Japanese whaling fleet, who claim to kill minke whales for “scientific research”, but they are simply attempting to recommence commercial whaling. The meat from this research is sold in commercial markets. Since 2005 Sea Shepherd Conservation Society has used its ships to disrupt Japan’s annual whaling expedition in Antarctic waters. (Be sure to check out the TV series Whale Wars) However this year, Sea Shepherd has announced it is suspending the campaign, since the Japanese whalers have doubled their whaling grounds and are now employing military surveillance to watch Sea Shepherd ship movements in real time by satellite. The result is that Sea Shepherd cannot compete with their military grade technology. Captain Paul Watson, founder of Sea Shepherd Conservation Society, has stated that Sea Shepherd will regroup with different strategies, tactics and an alternative way to dealing with the Japanese whalers.

Like other cetaceans, the Antarctic minke whale is also vulnerable to chemical and noise pollution. Climate change will also be a major threat to this species. With rising temperatures, a reduction of sea ice means the Antarctic minke whale may lose between 5 and 30 percent of ice associated habitat in the next 40 years. As the area of suitable habitat reduces and prey populations decrease there will be an increase in competition for space and food, ultimately decreasing the population of this whale species.

They are categorized as Data Deficient by the IUCN Red List (2008).