One of just three year-round Arctic whale species, bowheads, are famous for their massive bow-shaped heads, designed perfectly for one of their main challenges: getting through think sea ice to breathe. Bowheads are able to use their large reinforced skulls and powerful bodies to break through ice 20cm thick. Although Inuit hunters in Alaska have reported whales surfacing though approximately 60cm of ice. Their Heads make up about a third of the total length – which in adults can be up to 20 metres – newborn calves are about 4 metres long and weigh 2-3 tonnes.

Bowhead whales are also known in quiet Arctic waters for their intense bouts of social group interactions, involving tail and flipper slapping, as well as breaching (leaping entirely out of the water) – which is an impressive feat for whale that weigh up to 100 tonnes.

Whales are close to the top of the food chain and important indicators of overall health of the marine environment. The bowhead whale’s conservation status is listed as “Least Concern” overall, however some populations, such as the East Greenland-Svalbard population are endangered.

Data has shown that bowhead whales may be among the longest-lived animals on earth. Based on the recovery of stone harpoon tops in their blubber, and from analysis of eye tissue, scientists believe that the life span of bowhead whales can be over 100 years. 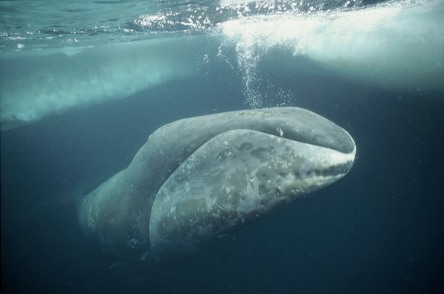 Like the other ice whales (beluga and narwhal), bowheads also have no dorsal fin, enabling them to move easily under the sea ice. Bowheads can dive for over 30 minutes at a time. They typically spend the entire year in Arctic waters, their travels shaped by the melting and freezing of the ice, and seasonal movements to a series of spring-summer productive feeding areas. They have a very thick layer of blubber – approx 40-50cm – which serves primarily as an energy store to see them through the annual cycle. 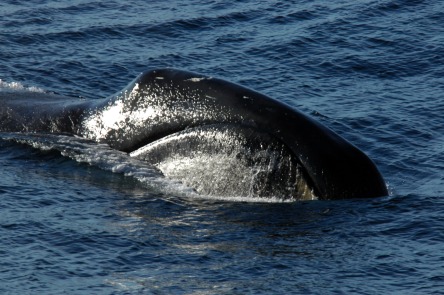 Bowheads are baleen whales, with about 250-350 keritanous baleen plates on each side of their upper jaw. These massive vertical plates – up to 4.6m long in fully grown individuals, the largest of any whale – to filter their food from the hug open-mouth gulps of water that they take. Bowhead whales need to eat about 100 tonnes of food annually, mainly tiny crustacean zooplankton. Most of their annual feeding occurs in the summer months, and much of that in the Canadian waters.

The bowhead whale has been a victim of the appeal of its long baleen plates and thick blubber – the most economically valuable whales. Hunted by commercial whalers until the last century for whale oil and baleen, bowhead whales are still recovering slowly from their economic extinction. While some populations are faring better as a result, it will take many more decades for this long lived and slow reproducing species to recover to its pre-whaling numbers. Inuit in Canada, Greenland and Alaska are allowed a limited subsistence hunt for bowhead whales.

Threats: Modern threats to bowhead whales include sea ice retreat and changes to food web dynamics due to rapid climate change and ocean acidification. Bowheads are also affected by direct and indirect impacts of increased development such as oil and gas exploration, commercial shipping, and fishing.

The Canadian and Alaskan governments have attached satellite radio transmitters to a sample of bowhead whales, in order to better understand seasonal movements and habitat use of these Arctic giants. This information can be used to identify and protect the most important areas used by these whales, and to help plan further human activities, like shipping and development, in these sensitive, quiet arctic waters – the bowheads’ home –  and in all decisions regarding the future of Arctic marine systems facing rapid climate and economic change.