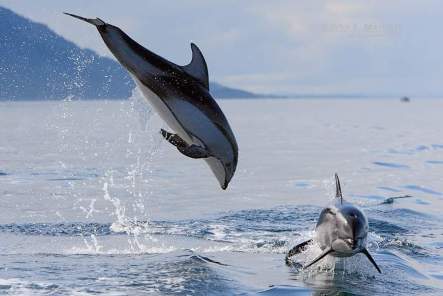 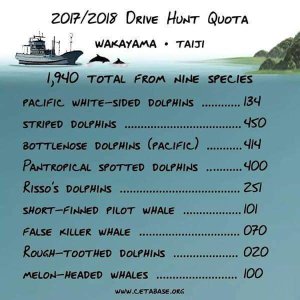 The Pacific white-sided dolphin is energetic, active and is frequently seen leaping, belly flopping and somersaulting. They are strong fast swimmers and enthusiastic bow riders, often staying with moving vessels for extended periods.

The Pacific white-sided dolphin has a robust body with a very short stubby beak and black lips. The dorsal fin is one of the most distinguishing characteristics of this species being tall, falcate, and bicoloured with a black leading edge fading to grey on the trailing edge. The large flippers are similarly coloured with rounded tips. Overall the Pacific white-sided dolphin is dark grey or black in colour. As its name suggests, it has a greyish thoracic patch which extends down the sides to just below the dorsal fin. Thin greyish stripes under the dorsal fin meet and broaden along the tailstock. The throat and belly are bright white. The eye is surrounded by a dark patch and there is a black stripe running from the face to the flippers and down to the anus, separating the white underside from the greyish flanks. Several colour morphs exist throughout the species range. The Pacific white-sided dolphin may be confused with the common dolphin, but the latter has a more pronounced beak and different colour pattern, whilst the former can usually be easily identified by its diagnostic dorsal fin.

Pacific white-sided dolphins are extremely agile, acrobatic and social. Generally traveling in groups of tens or hundreds of individuals, they can be seen in herds of 2,000 or more. Groups are often segregated according to sex and age. They associate with many other species including northern right-whale dolphins, Risso’s dolphins, sea lions, and seals. They are avid bow and wake riders, and are known to actively approach boats. They can be seen performing leaps, flips, spins, somersaults, and they often porpoise at high speeds. Large groups travelling at high speeds create a lot of surface disturbance that is visible from a great distance.

The Pacific white-sided dolphin is found in the cool temperate waters of the North Pacific and adjoining seas. It prefers deep, offshore waters around the continental shelf although they can also be found in more nearshore waters. In recent decades the major threat to this species was bycatch in drift and gill-net fisheries operated on the high seas. Many thousands of individuals were killed before the fisheries were banned in 1993. Bycatch in other fisheries however remains a threat. Pacific white-sided dolphins have also been taken in small numbers off the coast of Japan, and that country is considering starting regular hunting of this species again. Other threats include prey depletion, marine debris and the impacts of climate change.

Instead of driving the Pacific white-sided dolphins into the cove the Taiji dolphin hunters and trainers will do an off-shore capture. In the off-shore capture the dolphin hunters will try to orchestrate large nets to surround the Pacific white-sided dolphin pod. The small skiffs will then attempt to pull these nets tighter and tighter, making if more difficult for the dolphins to swim or even surface. 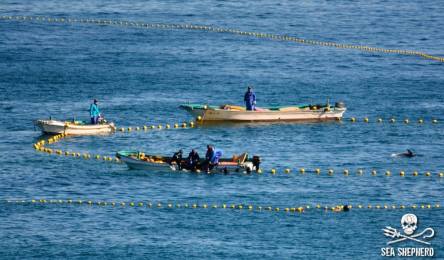 These dolphins are then subjected to examination by trainers to determine probability for a life of captivity. The dolphins are then tossed into skiffs and held down by several of the Taiji fisherman netting them to the floor of the boats. They are then taken to the Taiji harbour sea pens (floating sea prison) and dumped over the side of the skiffs into the tiny sea pens, which will hold multiple dolphins.

Pacific White Sided Dolphins at Dolphin Base in December 2013: 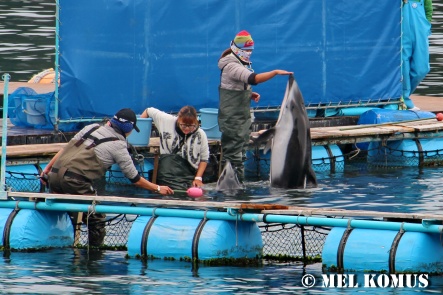 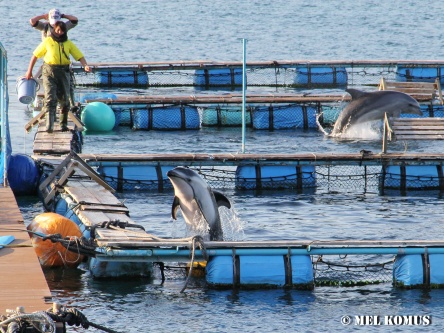